Do Not Sell My Personal Information
reee etc (added April 28)

at the editing joint with “drive” i just feel like i should write something even though i’ve not too much to report… i keep getting a few letters everyday or so, as usual many nice words of encouragement, and anticipation, everyone waiting for the record…the record appears to have an overall motif of a fire sprit… like ‘elementals’… spirits are in everything surrounding the human world,… years ago when i was at the school of visual arts i had a teacher who was deep into various occult and esoteric fields, he came up with some interesting stuff for example i recall his relating the phrase from the bible “go thou forth upon/on one knee”with the hanged man of the tarot who though upside down suggests kneeling… anyway, he saw a picture i’d taken of blue water in a swimming pool and pointed out a shape that the camera had captured that he said was a ‘water sprite’… and yeah often photos of trees and of the random shapes of nature will reveal some forms of things that the eye wont necessarily make out on its own… {people call nature chaotic but when one steps back from the human world, its so called orderly forms are subject to the same wild rules that apply to “nature” (i’m told that the Japanese had no word for nature until their contact with the western world, if everything in ones reality exists how can one then divide that reality into realms of “nature” and non-“nature”)… point being that from an airplane the lights of a big city are as chaotic as stars, streets like veins and arteries… i think its the straight lines of human organization that eventually will be seen to be illogical, that the structure of the universe is chaos and our struggle to overlay order is some kind of ancient fear response (the visual art of schizophrenics is frequently based on symmetrical motifs)… some of you may be familiar with that fantastic series of paintings of cats by one Louis Wain that morphed into amazing symmetrical mandalas as the artist gradually lost his “reason”…there are a lot of his regular cat paintings on view around the net but this set here are always to be found in discussions of schizophrenic art as their progression from cheerful kitties into shapes that resemble pure energy is apparently quite unique… one thing that is great to me is how his ‘sane’ cat illustrations are very dated in their victorian style and sensibilities while these guys here are so timeless and futuristic 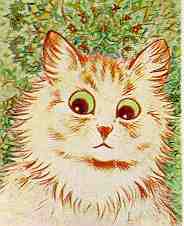 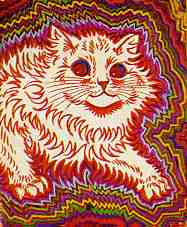 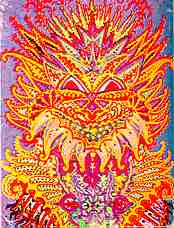 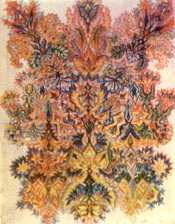 Wains cats are fantastic in their so called madness… im also struck by the amazing similarities between them and indian, eastern mandalas and religious art, these similarities very specifically support Jung’s archetype theories and as usual im surprised that i’ve never encountered them in discussions thereof… i mean check out the central cat pic, doesn’t it totally look like an indian rug or print? these ‘paisley shapes also relate to fractals, they’re the stuff of the inner mind thats the same for everyone}… as usual i’ve digressed… so we all really know that all the explaining of science and mathematics is really all subjective , that there are no facts only opinions… my opinion is that when Rob Roth was taking pictures of flames to use for our record/cd cover he was close enough to the ‘other side’ to get a shot of some kind of dragon like spirit creature made of fire and we’re gonna use that for cover art, its pretty amazing and thats what i was trying to explain here, i wanted to tell you something about the record that im pretty sure’s not gonna change… the real scoop i suppose is that this is likely gonna be the first cover with a graphic rather than a picture of the band… Rob did do a whole new shoot which will naturally be in the thing but the actual cover that he did is so cool, this one image that is so weird and great i think it conveys something intangible that everyone will like… related to that here’s a story that i dont think you know: ok, again although im quoted somewhere as saying “the hunter” record is my favorite this isn’t the case, im not sure where that came from, interviewers have a tendency to sort of hear what they want to, anyway i wouldn’t say any of the records were ‘favorites’ as i tend to see them as all one thing anyway… so… everyone knows that the ‘hunter’ cover just blows big time, eats the big one etc. etc. the original idea was to get a really great make up artist like Rick Baker or such and have everyone done up as half animal, sort of ‘island of dr. moreau’, then the photograph was supposed to be dark, kind of old-master brown tone, a bit like our first one or like the first two stones albums, just simple and dramatic, portraits of these animal people with the title… right? got that? easy right? HAH! so even though the idea was there for SIX FUCKING MONTHS!! of course it all got right down to the last minute and the lousy existing cover is how the chrysalis art director squeezed it out… now somewhere in there after the session was done and we were disappointed to say the least a couple of guys showed up at our office with a really great cover design that they had worked up on their own, it was mainly a gritty black and white picture of a woman cropped from the neck down, no face, she’s wearing a trenchcoat, legs with high heels, and on a leash she’s got a cheetah… so what’s the punchline? i guess you know… we liked that but got talked into putting the awful band shot on the cover since “there had to be a picture of debbie, the band, bla bla etc” i dont know maybe it wasn’t up to us… anyway and i’ve always regretted not getting the cheetah picture on the ‘hunter’ cover, it would have changed the tone of the whole record, instead of looking like some piece of forced commerciality it would have suggested what it actually was which was a much more experimental recording… the two guys who had he picture are out there somewhere, i’ve never seen it again, maybe somebody knows and perhaps we could put it on a re-release someday
thats the story… this is rock trivia really and though i may sound pissed off i try very hard not to be tempered by loss or regrets and most of the time am successful in just going forwards
thanks again    keep sending pictures
chris (i didnt know this was gonna be so long)